This front page of the Upper Des Moines newspaper was published on January 9th, 1868 ...nearly 150 years ago! What will YOU find in our 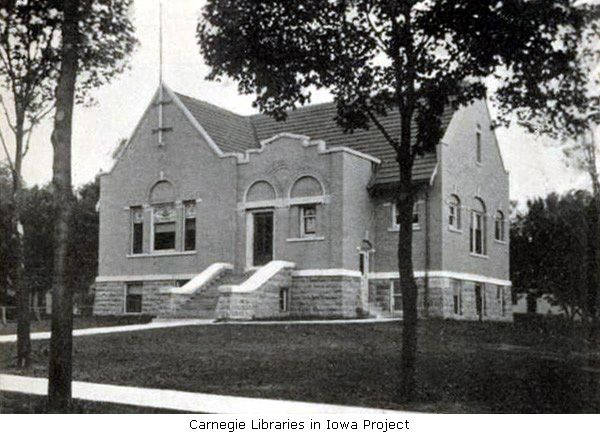 The city of Algona was settled in 1854, however, the formation of a library did not occur until 1889. That year the W.T.C.U. (Women’s Temperance Christian Union) began the quest for a public reading room. Led by Mrs. W.H. Ingham and Mrs. Lizzie B. Read this group had the first library fundraising ever in Algona!

That event was Spring Banquet and proceeds from this were used to establish a reading room. The “library” opened in 1890-with 100 books. A “volunteer” librarian was appointed every 3 months.

In 1893 the Algona Library Association was formed and became incorporated in 1894. The amount of capital stock was set at $25,000. Proceeds from selling this stock were to be used to operate the reading room. What a novel idea! Unfortunately, this venture was not very successful. Determined to keep the reading room open President Col. Thomas F. Cooke and other library supporters put the issue of a Free Public library to a citizen vote in 1897. It was defeated. Imagine how jubilant Algona readers were in 1898 when the measure to establish a Free Public Library was finally passed by voters!

The library Board met and began the process of creating the city-funded Algona Free Public Library.

Algona Gets a Library!
January 3, 1899 the Algona Free Public Library was opened in the G.A.R. Hall. The library was located on the first floor. This building is still standing today and houses the Kossuth County Historical Society!

That first library consisted of 1,916 books and approximately 2,000 issues of older magazines and newspapers. Mr. E.P. McElroy was chosen as the first “official” library director. He had served in this capacity since 1896.

Algona readers avidly supported their new library – during that first year library patrons checked out 10,287 items. Not bad for a community with a population of 2,911! The total budget for that year was $389.70. Also, 47 new books were purchased during the year at a total cost of $11.31! It wasn’t long before it was evident that the library needed a larger building.

The Ultimate Fish Story!
This is perhaps the only library in the world that gained a new building because of a fish! While on fishing trip to Florida William Ingham caught a 6’1” Silver Tarpon. Of course, he had it mounted for display! This caused a problem. Mrs. Ingham felt that their home didn’t have sufficient wall space to display the fish. The Inghams decided to give ½ block of land to the city – provided it was used to build a library to house the fish. Andrew Carnegie provided $10,000 for the new building, more funds were sought and in 1904 the new Carnegie Library was opened to the public!

Thanks to the generosity of Lucinda Call, funds were available to add a special library area for children. The Children’s room opened in 1951 in the lower level of the Carnegie Library.

By the late 1970s the library had outgrown the Carnegie Building. There simply wasn’t enough room for the necessary library materials and equipment! The library board mounted a fund drive to purchase from John Dreesman a building located at 210 N. Phillips. It was extensively remodeled and the “new” facility was opened to the public the fall of 1983!

The Algona Public Library is still located in this building.

In 1989 the Friends of the Algona Public Library foundation was formed with over 100 members. This group generously enhances the library by providing many things that are needed but not included in the library budget.

This front page of the Upper Des Moines newspaper was published on January 9th, 1868 ...nearly 150 years ago! What will YOU find in our archive?